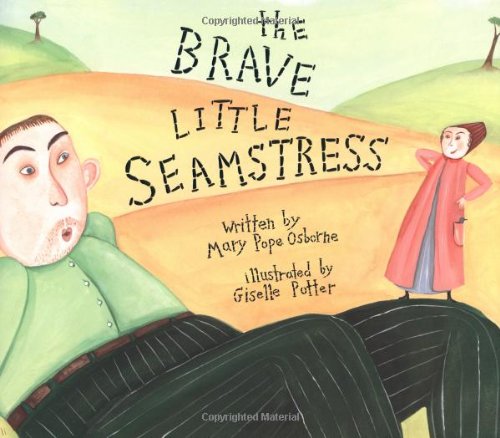 With this return engagement of the creators behind , Osborne and Pope seem to be giving fairytale history a feminist makeover, one character at a time. Unleashing the same sass and spirit that lit up the pages of their first team effort, the collaborators here present a stalwart seamstress who, after slaying seven flies, embroiders "Seven with One Blow!" on the back of her favorite pink coat. She quickly decides that "her little workshop was far too small to contain her valor" and so sets off into the wide world, where her advertisement is repeatedly misinterpreted in a series of amusing encounters. When she's mistaken for a "woman warrior," for instance, her no-nonsense approach prompts two giants to polish each other off. Potter joins in the fun when she portrays the seamstress using her red-toned coat toreador-style to lure a unicorn into captivity. In a clever twist on the denouement, when a greedy king reneges on his promise to the heroine, Osborne sends an admiring knight to warn the seamstress, who then delivers the king's comeuppance and wins both his kingdom and the hand of the knight (she proposes, naturally). Osborne's jaunty retelling ("Her heart wagged with joy like the tail of a lamb") acts as the ideal springboard for Potter's wry illustrations, a comely pastiche of droll, spindly-legged characters and pastoral settings rendered in the same soft earth tones that marked their debut outing. This briskly imaginative romp will sew up fans' allegiance and gear them up for this pair's next Grimm makeover. All ages.