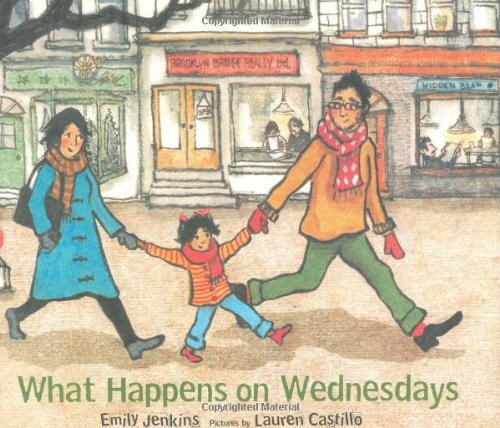 What Happens on Wednesdays

Radiant mixed-media art by a debut illustrator captures the warmth and candor in Jenkins's ( ) sparkling slice-of-life tale, narrated by a much-loved child in Brooklyn. From the moment she wakes up all the way to her bedtime, the unnamed girl describes everything that happens on Wednesdays, along the way giving a sense of her personality (“Today is not a kissing day,” she reminds her parents several times), her neighborhood (she knows all of the dogs by name), her school and, especially, her joy in her routines. “Then we go down the steps, up the block where we once saw an umbrella caught in a tree, past the bakery where we got that chocolate croissant,” she says, and readers can almost hear her pointing these landmarks out to her mother, whose hand she holds in Castillo's collage. Intriguingly, Castillo shows the mother/daughter pair several times on this spread, forcing readers to follow them along the route. Not that the audience needs a push—Castillo makes the scale unusually friendly, the colors mild and the lines agreeably soft, while her figures and trees look drawn from crayon or pencil and then cut and pasted in, rendered almost like the work of children. The girl's apartment proves especially inviting, with large areas (wallpapers, bedspreads) collaged from patterned paper. Throughout, the artist shows real skill with color, punctuating urban grays and browns with the girl's red clothes. But for all the various touches, the look is unified—and extremely effective. Ages 3-6.