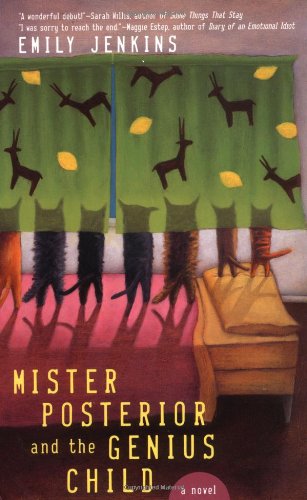 MISTER POSTERIOR AND THE GENIUS CHILD

This funny, touching first novel captures the domestic anarchy of the 1970s through the eyes of brainy eight-year-old Vanessa Brick, a student at an alternative Cambridge, Mass., elementary school. Vanessa's well-meaning but frazzled mother, Debbie, is divorced and raising Vanessa with the help of divorced neighbor Katty, who decides she's a lesbian, and boy-crazy teenage babysitter Landis. The free-loving, ashram-going grownups in this book insist on treating their children like adults, though no one seems to have a very clear idea what adulthood means anymore. Vanessa's best friend, Anu Bhaduri, is her true support, but Anu becomes traumatized and withdrawn after she's mooned by a flasher terrorizing the neighborhood, leaving Vanessa to muddle through playground politics on her own. Vanessa is chosen to write a play incorporating classroom spelling words (which include "syphilis" and "gestate"), but when she names all her characters with euphemisms for buttocks and uses the word "receptacle" to discuss the proper function of the anus ("You put things in a Receptacle... but things come out of your bottom.... It is not a good idea to put anything in"), she sparks a schoolwide controversy over just what kind of limits and examples adults should be setting for children. With dead-on dialogue, Jenkins deftly satirizes the narcissism of the 1970s while maintaining compassion for those caught in the maelstrom—especially the likably vulnerable Debbie and the winning Vanessa. A charming debut that will have readers of Vanessa's generation chuckling with recognition.