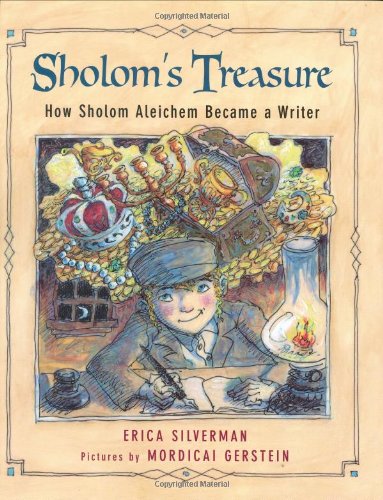 Silverman ( ) and Caldecott Medalist Gerstein ( ) make an ideal pairing for this picture-book biography of Yiddish luminary Sholom Aleichem (born Rabinowitz. 1859–1916), whose work inspired (as explained in an author's note). Sholom's father, "his brow usually furrowed with worry," looks happy when he reads to his guests at the family's Saturday night parties. "And when Father was happy, Sholom was happy." Silverman thus sets the stage for Sholom's quest to please his beloved father. In the process, the boy discovers a gift for mimicry, and a thirst for stories. Gerstein's comic strip–style images of the hero aping his teacher, grandmother and others comically demonstrate the fellow's talents. Poverty drives Sholom's family of 14 from their small shtetl, his mother dies of cholera, and his father marries a shrew, yet Sholom remains upbeat. Silverman's accessible prose keeps a narrative dense with incidents and people moving along briskly. Gerstein's fluid, exuberant pen-and-ink and watercolor wash illustrations, which frequently appear as panels above and below the text, literally illuminate the story. The artist does not soft-pedal the sorrows of Jewish life under the Czar; the oppressiveness feels real and the scenes of the mother's death and its aftermath are heartrending. Gerstein beautifully conveys how a rich inner life and keen observational powers sustain Sholom, and shape him into an artist. Ages 5-up.