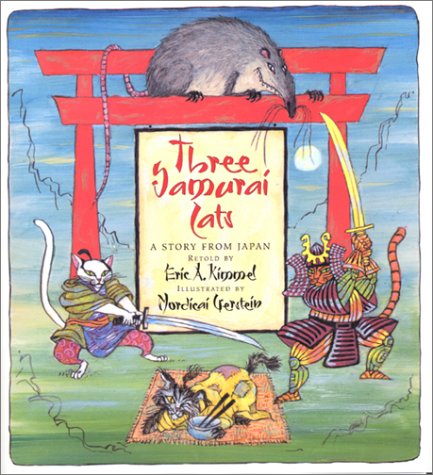 Plenty of action enlivens this team's () version of a Zen parable about a castle held hostage by a gluttonous rat. The castle (powerful lord), a bulldog in a medieval Japanese costume, requests helpers from a shrine "famous for its corps of fighting samurai cats." The rat defeats the first two candidates handily. "Watch!" proclaims the second, in the manner of martial arts heroes, "I will demonstrate the technique of , the wild goose, followed by , the bottom vertical split"; the swish of his sword is almost audible, but his artistry is wasted when the rat boots him across the room. Gerstein uses Japanese –style panels, but not their flat figures; his animals have heft, bulk and plenty of untidy fur. He has great fun with the paunchy rat, who alternately terrorizes the good guys and eats himself silly. At last the shrine sends Neko Roshi, the Zen master cat, a mangy but patient animal who waits for the rat's inevitable misstep and exploits it; the rat, threatened at last, leaves quietly. "Neko Roshi allowed his opponent to defeat himself," explains the head of the fighting cats, when the daimyo comes to express amazement: "Learn to act without acting." Children may not fully understand the cat's paradoxical tactics, or the mystical Zen message, but the sense is clear enough. Humor, wisdom and excitement make this offbeat tale a winner. Ages 5-8.