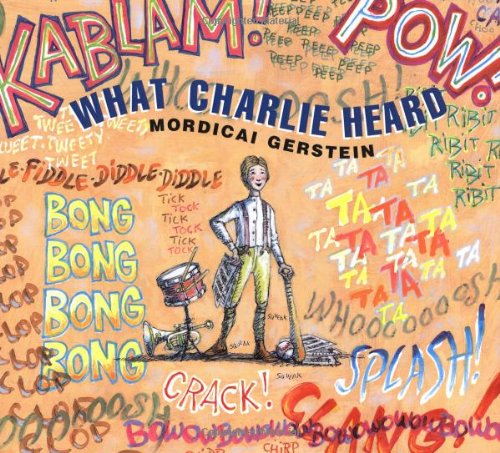 Profiling American composer Charles Ives, Gerstein () plies an artistic style as densely and consciously layered as one of Ives's compositions. The illustrations provide an instant visual connection to the music, which attempts to encompass the sounds of everyday life: Gerstein overlays his spry pen-and-wash artwork with multiple clusters of sound-effect words (e.g., a series of s surrounds a caged bird, big red s surround toddler Charlie as he bangs on a metal pan). "Charles Ives was born with his ears wide open," Gerstein begins, detailing the kinds of sounds "Charlie" might have heard as a child: included are Charlie's music teacher father's trumpet, the swish of his mother's long dress and "dogs and crickets and the church bells next door," sounds that would later be woven into Ives's music. He tells of Charlie's high school efforts as a composer and how, later, Charlie composed music on the train as he commuted to his insurance job. Gerstein also describes the music's chilly reception: "Most people didn't know how to listen to it. Some thought it was a joke. Others just heard noise and got angry." The book concludes on a triumphant note: not only does Ives finally win acclaim, but he plans to write a Symphony: "Wouldn't be a noise!" Gerstein creates a rousing visual cacophony that echoes Ives's compositions in this inspired picture-book biography. Ages 4-8.