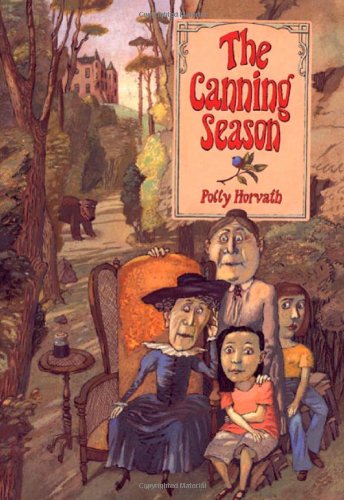 Unruly, unpredictable and utterly compelling, Horvath's newest is even more startling than her —it's just as lunatic, but the humor is both darker and more confident. Ratchet, a 13-year-old whose upbringing has been governed by her single mother's global horror of "That Thing" on her shoulder blade, finds herself summarily shipped off to a remote, bear-infested corner of the Maine coast, where distant nonagenarian twin cousins live in unprecedented eccentricity. Penpen, who takes an interest in Zen Buddhism, and Tilly, who takes in lots of whiskey, spin animated if grotesque tales of their youth (they especially like to discuss their mother's suicide—she cut off her own head). The old ladies make judicious use of expletives (e.g., they quote a governess who called them "you little fucks"), which may bother some adults but is also hilariously disconcerting. For the shy, withdrawn Ratchet, Glen Rosa is a haven, and so it also proves for a sullen teenager named Harper, abandoned there in the mistaken belief that Glen Rosa is an orphanage. Horvath's descriptive powers are singular ("She felt a terrible wrench at being pulled away from her mother, like a boot being pulled out of thick mud with a great sucking sound"), her uncensored Mad Hatter wit simply delicious, her storytelling skills consummate. Readers may find themselves wondering just how far Horvath will go—and they won't be disappointed with her steering. Ages 12-up.