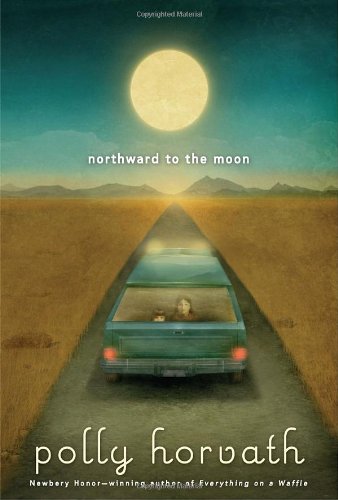 Northward to the Moon

This poignant sequel to Horvath's continues to trace the physical and emotional journeys of Jane's unconventional family. The story begins in Saskatchewan, where Jane's new stepfather, Ned, has taken a position as a French teacher. When he's fired from his job (it turns out that he doesn't know French), Jane, her parents, and her younger siblings head west to visit one of Ned's friends, an elderly Native American woman. Then the family moves on to Vegas, trailing Ned's estranged brother, who, for unknown reasons, has left them a bag of money. For a while, it's fun for Jane, pretending they are outlaws on the run (“I imagine us all on horseback with masks, robbing trains and making our way to Mexico”), but when they settle in with Ned's mother on her remote horse ranch, Jane begins to long for Massachusetts, her home before Ned entered the picture. A dynamic montage of dark and light moments, this novel shows rather than tells Jane's changing moods, her ambivalent feelings about being uprooted, and her quiet observations of her unpredictable yet endearing family members. Ages 10–13.