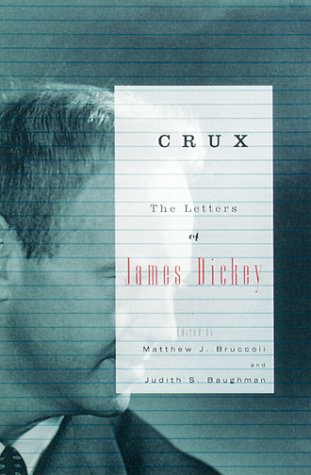 Crux: The Letters of James Dickey

Dickey's indefatigable editor and friend, and senior compiler of his letters, Bruccoli ""disapproved of his conduct and celebrated his genius."" Whatever that conduct was, it rarely emerges from these letters. Dickey (1923-1997) ""deliberately promoted and exaggerated his several reputations--genius, drinker, woodsman, athlete--until the legends took over after [the novel] Deliverance."" Not a biography in letters, Crux is, after the early family letters, some later ones to a son and to (or about) his second wife, a selected professional correspondence. When Dickey's first wife dies, in October 1976, and he remarries two months later, we are greeted by a gap from August 1976 to August 1977. What we do have, however, are pages of literary politics, self-seeking, currying favor and attacking writers unworthy of his good words. Nabokov is ""tiresome and disgusting... with a built-in intellectual smirk."" Frost is ""that super-jerk."" If all poetry, he says, were like that of Wallace Stevens, ""I would have no interest in the subject."" Anne Sexton is derided for ""continual pushiness."" John Hollander is ""a literary pimp and time-server."" Robert Lowell, whom Dickey will butter up later, is ""just another example of the brilliant, pampered American poet who spends the rest of his life, after the initial success, trying to progress and keeps falling down and down."" Despite some praise of contemporaries and some steadfast loyalties, Dickey is largely a sour novice. Pathos enters when his second wife becomes ""all but comatose with cocaine and heroin,"" and he struggles to write amid ""a maelstrom of misfortunes."" The letters end abruptly with a friend's funeral and Dickey's warmth of feeling toward him, but the personality evoked by the letters is generally unlovely. 20 b&w photographs not seen by PW. (Nov.)
close
Details