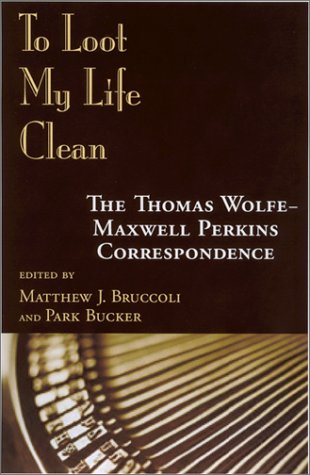 To Loot My Life Clean: The Thomas Wolfe-Maxwell Perkins Correspondence

A complete collection of the 10-year correspondence between novelist Thomas Wolfe and Scribner editor Maxwell Perkins debunks the myth that Wolfe was an undisciplined child-genius dependent on a stern father-editor. The volume's 251 letters, two-thirds of which are published for the first time, include correspondence with John Hall Wheelock (who handled the line-editing and proofreading Perkins shunned) and other Scribner's staff. Wolfe's letters resemble his novels: frenzied, expansive, rawly emotional and confessional, as chaotic as the American scene he celebrated. Most were written abroad, as the peripatetic Wolfe fled the distractions of critics and his destructive relationship with socialite Aline Bernstein. Wandering and homesickness are constant themes. Wolfe's mercurial personality blazes forth as he rhapsodizes about America's romantic grandeur and rails against ""the sterility crowd,"" the ""sniffers, whiffers and puny, poisonous apes"" like T.S. Eliot and other Lost Generation writers he felt were in love with despair. Wolfe emerges as driven, intensely committed, locked in a torturous, exhausting struggle with his talent and material that verges on madness--a writer reliant on his editor's judgment but also possessing a clear artistic vision. High-strung, hypersensitive to criticism and in need of constant reassurance, he is difficult, demanding and ""crammed to the lips with living."" Though sorely tested by their contentious professional relationship, Wolfe and Perkins's abiding affection clearly survived Wolfe's 1937 break with Scribner's. ""My friendship with Tom,"" wrote Perkins to Wolfe's family after his death in 1938, ""was one of the greatest things in my life."" Bruccoli, a Fitzgerald scholar at the University of South Carolina, and his associate Bucker, present a fascinating, if partial, portrait of one of the 20th century's most vital creative partnerships. Illus. (Oct.)
close
Details