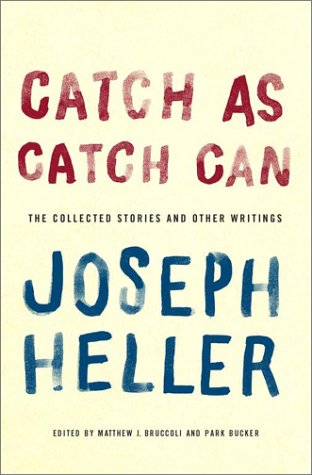 CATCH AS CATCH CAN: The Collected Stories and Other Writings

This posthumous collection of Heller's writings combines his published stories with five previously unpublished ones, along with several essays about the writing of—and fallout from— and a play based on that novel. The collection, which covers 50 years of Heller's work, is striking for its range of tone. Readers familiar only with the acid humor of will be surprised by the melancholy of his early naturalistic stories about poverty, forgotten war heroes and recovering drug addicts. WWII vet Nathan Scholl returns from a heroin treatment program in Kentucky to his native Washington, D.C., where he drifts through his old haunts dejected and uncured, in "To Laugh in the Morning." In "Lot's Wife," Sydney Cooper watches as his wife, Louise, nonchalantly smokes a cigarette in the car, unaffected by the presence, outside the vehicle, of the injured man she's just run down. The couple reappear in "The Death of the Dying Swan," she as a party hostess with a plastic smile, he as the dutiful but resentful husband who escapes the party by volunteering to buy a jar of mustard. The collection shows the gradual evolution of an author who began his career writing polished but predictable stories and ended up inventing a voice and idiom that came to define the postwar era. The volume will be much appreciated by Heller's fans and students.