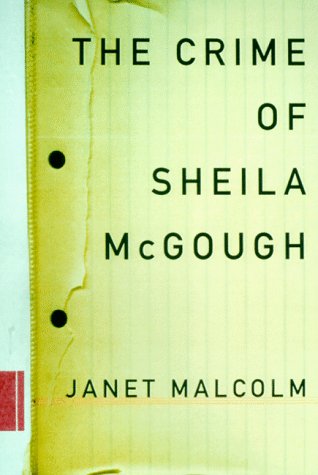 The Crime of Sheila McGough

Malcolm's newest foray into the uneasy relationship between truth and narrative takes on the legal system in defense of disbarred and criminally convicted attorney Sheila McGough. McGough contacted Malcolm when she was released from prison, claiming that she had been wrongly accused of complicity in the schemes of a con-artist client and that her only ""crime"" was overzealous representation. Malcolm's theme is clear: trials are narratives, neatly packaged stories, while the truth is a ""beast,"" not easily confined by such artifice. It's an extension of the line of thinking she pursued in such previous books as The Silent Woman, In the Freud Archives and The Journalist and the Murderer. While Malcolm writes of McGough's ""guileless and incontinent speech,"" she ultimately voices a befuddled respect for the lawyer, arguing that true, selfless advocacy may not be sexy, but it exists. Given Malcolm's personal experience with the law (the Supreme Court found that she had misquoted Jeffrey Masson in a 1983 New Yorker profile), it's easy to read this book as yet another act of self-defense in which Malcolm, acutely self-conscious about her journalistic efforts to impose order on mere facts, tells readers, once again, that the ""truth does not make a good story."" Readers are left with the verdict that Malcolm, who recognizes and embraces both the necessity and the inherent ""untruthfulness"" of narrative, is an artist, while McGough, who values ""a great number of wholly accurate and numbingly boring facts,"" is a tiresome, if truthful, fly in the narrative soup of the law. Malcolm doesn't offer any sustained psychological appraisal of McGough. And that's too bad, because, although arguably not criminal, McGough's behavior was surely unlawyerlike--as though some personal need beyond the best interests of her client drove her to act as she did. As to what this need might have been, Malcolm is lamentably silent. (Feb.)
close
Details