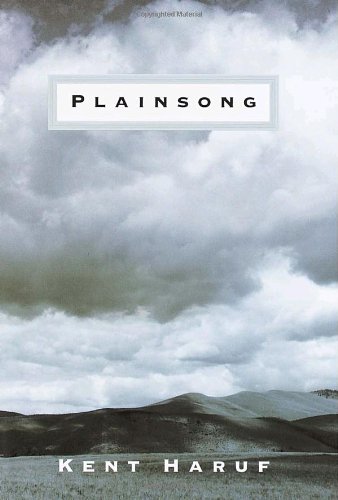 In the same way that the plains define the American landscape, small-town life in the heartlands is a quintessentially American experience. Holt, Colo., a tiny prairie community near Denver, is both the setting for and the psychological matrix of Haruf's beautifully executed new novel. Alternating chapters focus on eight compassionately imagined characters whose lives undergo radical change during the course of one year. High school teacher Tom Guthrie's depressed wife moves out of their house, leaving him to care for their young sons. Ike, 10, and Bobby, nine, are polite, sensitive boys who mature as they observe the puzzling behavior of adults they love. At school, Guthrie must deal with a vicious student bully whose violent behavior eventually menaces Ike and Bobby, in a scene that will leave readers with palpitating hearts. Meanwhile, pregnant teenager Victoria Roubideaux, evicted by her mother, seeks help from kindhearted, pragmatic teacher Maggie Jones, who convinces the elderly McPheron brothers, Raymond and Harold, to let Victoria live with them in their old farmhouse. After many decades of bachelor existence, these gruff, unpolished cattle farmers must relearn the art of conversation when Victoria enters their lives. The touching humor of their awkward interaction endows the story with a heartwarming dimensionality. Haruf's (The Tie That Binds) descriptions of rural existence are a richly nuanced mixture of stark details and poetic evocations of the natural world. Weather and landscape are integral to tone and mood, serving as backdrop to every scene. His plain, Hemingwayesque prose takes flight in lyrical descriptions of sunsets and birdsong, and condenses to the matter-of-fact in describing the routines of animal husbandry. In one scene, a rancher's ungloved hand repeatedly reaches though fecal matter to check cows for pregnancy; in another, readers follow the step-by-step procedure of an autopsy on a horse. Walking a tightrope of restrained design, Haruf steers clear of sentimentality and melodrama while constructing a taut narrative in which revelations of character and rising emotional tensions are held in perfect balance. This is a compelling story of grief, bereavement, loneliness and anger, but also of kindness, benevolence, love and the making of a strange new family. In depicting the stalwart courage of decent, troubled people going on with their lives, Haruf's quietly eloquent account illumines the possibilities of grace. Agent, Peter Matson. 75,000 copy first printing; 12-city author tour. (Oct.)
close
Details