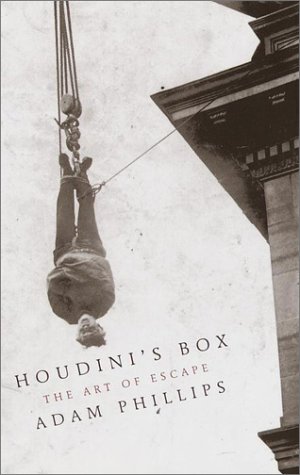 HOUDINI'S BOX: On the Art of Escape

"We cannot describe ourselves without also describing what we need to escape from, and what we believe we need to escape to," argues psychoanalyst Phillips (;; etc.). He explores literature and mythology—from Adam and Eve to Icarus to Emily Dickinson—for allegories of escape, but dubs Houdini, the great escape artist, as "the modern role model," for having transformed escape into mass entertainment. Phillips interweaves his meditations on these lofty characters with therapy-couch snippets from a rather annoying patient of his, who never knows what he wants until he escapes from it. Escape, Phillips suggests, is the life project of those contemporary Houdinis, "the neurotics, and their more fervent risk takers, the perverts." But unlike Houdini, they are "driven by a daunting misapprehension. They don't realize that we don't always flee from something because it is unacceptable; sometimes it is unacceptable to us because we flee it." Although Phillips writes elegantly, and is capable of provocative analytic insights, he sometimes lapses into banal aphorisms or puzzling digressions. This isn't an account of Houdini's career or the details of his tricks so much as a catalogue of the showman's obsessions. Phillips follows up pronouncements like "Houdini was to escapism what pornography is to sex" with discourses on how porn averts the "death of desire." At one point Phillips tells his patient, "I don't know if you've changed the subject or not"; it's a confusion readers may also share.