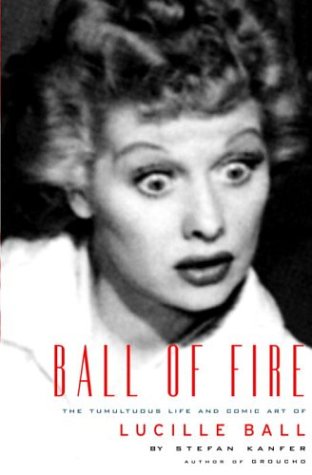 BALL OF FIRE: The Tumultuous Life and Comic Art of Lucille Ball

Early in the run of , Ball gave co-star Vivian Vance a hard time. Vance decided, "If by any chance this thing actually becomes a hit and goes anywhere, I'm gonna learn to love that bitch." She did, and so did the rest of the world. But according to Kanfer's excellent, compulsively readable biography, Ball (1911–1989) was much easier to love from afar (as was Kanfer's previous subject, Groucho Marx). Despite all the laughter the gifted red-headed comedienne produced, her personal life was unhappy. To save their marriage, she and Desi Arnaz produced and starred in . It revolutionized TV (it was shot on film with three cameras in front of a live audience), but the all-consuming pressure of the show (and other shows produced by their company, Desilu) pushed them apart and made them absentee parents. Although Ball reigned on four consecutive top-rated CBS comedies from 1951 to 1974, Kanfer sees a decline in the quality of her work beginning in the early '60s. Without Arnaz to dominate her and placate others after they divorced, Ball became all-controlling on her shows, and her temper and tactlessness began costing her professional and personal relationships. "She could be very cold," admits daughter Lucie Arnaz, "and although she told me she loved me all the time, I didn't feel loved." Kanfer's sad, well-written and -researched bio benefits from a wealth of previously published accounts (best are Kathleen Brady's and Geoffrey Mark Fidelman's ), but her story is still a compelling one. Photos not seen by .