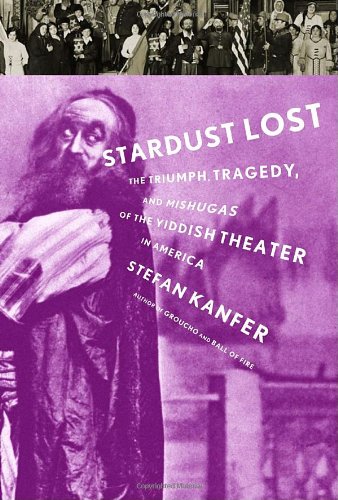 Stardust Lost: The Triumph, Tragedy, and Mishugas of the Yiddish Theater in America

In this highly readable social history of Yiddish theater, Kanfer traces the genre from its genesis in eastern Europe to its flowering on New York's Lower East Side in the early 20th century. He explores its success within the New World's intellectual ferment, as Jewish writers and performers introduced greenhorn audiences to Shakespeare and Tolstoy in a bid to enlighten the masses and stoke their social aspirations. But the plays' irony and rapid-fire timing made their flavor uniquely Yiddish, as they expressed and framed the immigrant experience—tackling issues from poverty to assimilation that elevated them above mere escapism. With the character-driven narrative skill and assiduous research that mark his biography of Lucille Ball ( , Kanfer limns delightful portraits of genre stalwarts like playwright/director Abraham Goldfaden and actor Jacob Adler. Though Yiddish theater had faded by mid-century, its demise hastened by Hollywood, Kanfer makes a salient case that it was more than a momentary fad. He argues for the pliancy of the "Velcro language," its DNA carried in the era's most influential acting teacher, Adler's daughter Stella—whose students included Robert De Niro and Marlon Brando. Through them, the legacy endures. Photos not seen by .