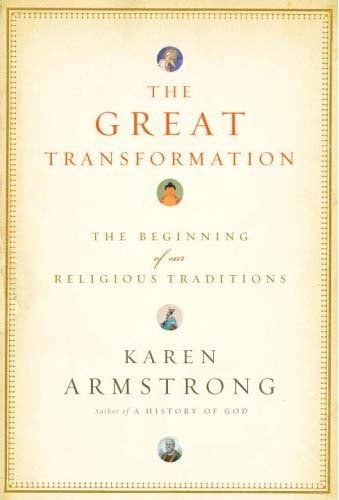 The Great Transformation: The Beginning of Our Religious Traditions

Having already recounted "a history of God," the redoubtable Armstrong here narrates the evolution of the religious traditions of the world from their births to their maturity. In her typical magisterial fashion, she chronicles these tales in dazzling prose with remarkable depth and judicious breadth. Taking the Axial Age, which spans roughly 900 B.C.E. to 200 B.C.E., as her focal point, Armstrong examines the ways that specific religious traditions from Buddhism and Confucianism to Taoism and Judaism responded to the various cultural forces they faced during this period. Overall, Armstrong observes, violence, political disruption and religious intolerance dominated Axial Age societies, so Axial religions responded by exalting compassion, love and justice over selfishness and hatred. Thus, the central Buddhist and Jain practice of ahimsa, doing no harm, developed in India in reaction to the self-centeredness of Hindu ritual, and Hebrew prophets such as Amos proclaimed that justice and mercy toward neighbors offered the only correct way of walking with God. Accounts of the world's religions often present them as discrete entities developing apart from each other in a vacuum. Armstrong's magnificent accomplishment offers us an account of a violent time much like ours, when religious impulses in various locations developed practices of justice and love.