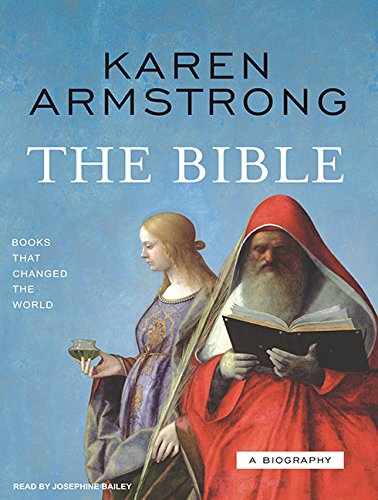 The Bible: A Biography

Part of 's Books That Changed the World series, this “biography” ambitiously undertakes discussing not only the Bible itself (including its history, authorship and origins) but more than 2,000 years of its interpretation by Christians and Jews. In eight short chapters, Armstrong brings the story of biblical hermeneutics from the early church fathers through the rise of monasticism, medieval Kabbalists, and Renaissance inquiry up to the Reformation and the Enlightenment. Armstrong has already perfected the concise but erudite primer on religion, so this brief introductory work can be preserved in its entirety without the awkward abridgments that characterize other scholarly religion books that are adapted to audio. Another plus is the crisp narration by über-British actress Josephine Bailey. She's in top form, lending the clipped and decidedly upper-crust accent that has served her well. American listeners may smile at hearing familiar biblical names such as Hezekiah or historical names such as Tyndale rendered with a British pronunciation, but Bailey's tone is flawlessly in keeping with Armstrong's learned account.