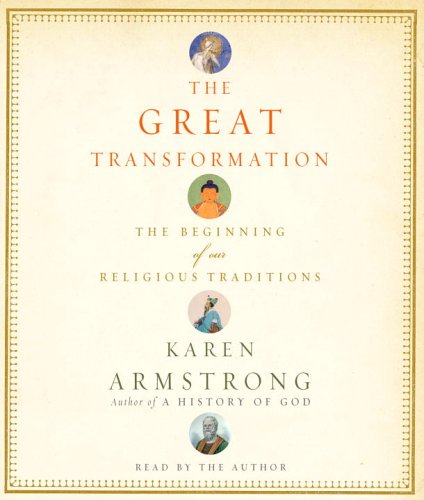 The Great Transformation: The Beginning of Our Religious Traditions

It's not what one may expect from a book about the development of the world's religions: "Crouched in his mother's womb, he lay in wait for his father, armed with a sickle, and the next time Uranus penetrated Gaia, he cut off his genitals and threw them to the earth." However, the Greek myth of Cronus clearly illustrates Armstrong's main thesis, that the "simultaneous" development of the world's religions during what Karl Jung called the axial age, is a direct result of the violence and chaos, both physical and spiritual, of past civilizations. Armstrong, a former nun turned self-described "freelance monotheist," has enough background and personal investment in the material to make it come alive. Her delivery is crystal clear, informative and, though somewhat academic, easy for the layman to understand. Her voice is straightforward yet wrought with palpable concern. This reinforces the book's goals of creating a clear understanding of where religious developments have come from and explaining how today's "violence of an unprecedented scale" parallels the activities that created the "axial age" in the first place.