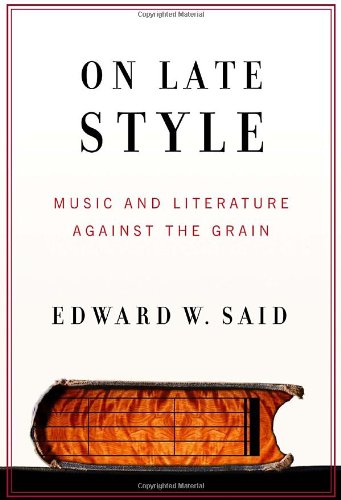 On Late Style: Music and Literature Against the Grain

This is the book culture critic Said was completing when he died in 2003. The critical survey had its genesis in a popular course Said taught at Columbia University, "Late Works/Late Style," examining "artists... whose work expresses lateness through the peculiarities of its style." Writing with insight and meticulous phrasing, Said studies the output of creative talents during their final years. The passing parade of artists, writers and composers includes Beethoven, Mozart, Jean Genet, Glenn Gould, Arnold Schoenberg and Richard Strauss. In one piece, Said details dramatic contrasts between Giuseppe Tomasi di Lampedusa's and Luchino Visconti's film adaptation of that novel; in another, he compares Thomas Mann's (1911) with Benjamin Britten's 1973 opera of Mann's novella, composed near the end of Britten's career. While "late works crown a lifetime of aesthetic endeavor," Said concludes there also is "artistic lateness not as harmony and resolution, but as intransigence, difficulty, and unresolved contradiction." As Said examined the effect of impending death on artists, leukemia led him to his own final pages, resulting in this erudite collection.