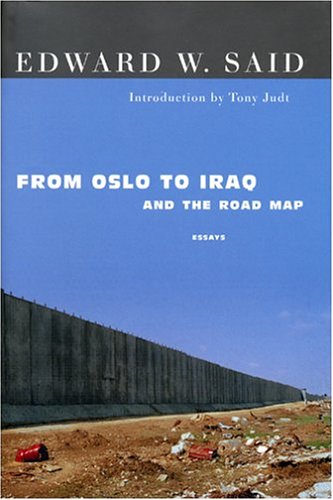 FROM OSLO TO IRAQ AND THE ROAD MAP

In the three years before he died of leukemia in September 2003, noted critic and commentator Said ( , etc.) observed with sputtering rage some of the grimmest moments in the tragic history of the Middle East conflict. The commentaries collected here, written mostly for two Arabic-language publications, are caustic and heartbroken, heaping scorn on the "demonic" Ariel Sharon, but reserving plenty of contempt for the "ruinous regime" of Yasir Arafat. Said has few allies in his call for Palestinians and Israelis to unite in a single binational state, but his critique of Oslo's approach to a two-state solution has come to seem prescient. He denounces suicide bombing, advising Palestinians instead to "seize the moral high ground" and build a civil society, but he insists that Israel's occupation, settlements and counterterrorist reprisals are primarily responsible for the conflict. After September 11, Said worries about the "Israelization of U.S. policy." But regarding Iraq, Said, who opposed Hussein's rule as well as the sanctions policy and the American invasion, doesn't suggest an alternative. He often criticizes all of the messy options available to policy makers, placing his hopes in nonviolent resistance movements that don't yet exist. Still, these essays are a reminder of what has been lost: a passionate and eloquent spokesman for the aspirations of progressives in the Arab world.