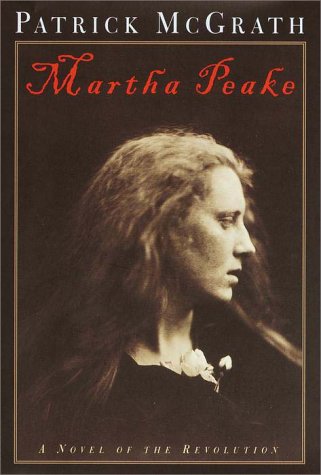 Martha Peake: A Novel of the Revolution

Known as a spinner of elegant neo-gothic thrillersDthe sort full of psychological tension but narrow in scopeDMcGrath tackles a much broader canvas in his sweeping new novel about the American Revolution. At the heart of McGrath's tale are a fatherDHarry Peake, an energetic Cornwall man broken by calamityDand his daughter and helpmate, Martha. Like many of his countrymen, Harry smuggles to avoid the excise, but after a nearly bungled job, his spine is broken and he is transformed into a misshapen monster. He sets off for London with eight-year-old Martha, earning money at first by exhibiting his deformed spine and later by performing his own Ballad of Joseph Tresilian, an allegory about the king's tyranny over the colonists. Although Harry's reputation growsDenough to attract the attention of Lord Drogo, an anatomist interested in collecting rare bonesDhe succumbs to drink and far worse, endangering now teenaged Martha and forcing her to flee to her cousins in America. But it is 1774, and those cousins, living in a fishing community north of Boston, are committed patriots. Martha throws her lot in with the Americans, but her loyalty to her father threatens her and the other colonists and, finally, determines her destiny. All this is narrated half a century later by Ambrose Tree, nephew of Lord Drogo's assistant, Dr. William Tree. Like many of McGrath's earlier narrators, Ambrose is unreliable; he recounts, and embellishes, the tales his uncle William tells at night in drafty Drogo Hall. As Ambrose's questionable assumptions are proved true or false, what is betrayed is not the oh-so-familiar black heart of the narrator but the sweet heroism of the protagonists. McGrath (Asylum) takes a big risk, but the result is an invigorating take on the Revolution, just the tonic for even the most jaded reader during this election season. Agent, Amanda Urban at ICM. (Oct.)
close
Details