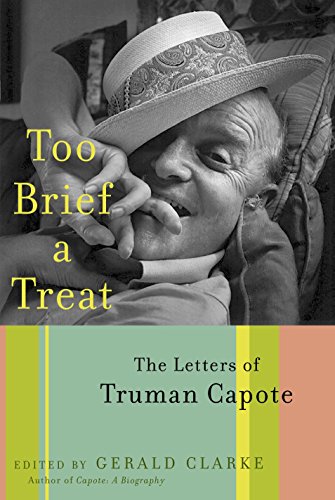 TOO BRIEF A TREAT: The Letters of Truman Capote

Considering Truman Capote's fabled social life, one would think that his private letters would be dripping with juicy gossip. Indeed, with correspondents and friends that included Jacqueline Kennedy Onassis, Lee Radziwill, Cecil Beaton, Christopher Isherwood, David O. Selznick, Tennessee Williams, Audrey Hepburn and Richard Avedon, these bright, energetic missives do include an occasional tasty tidbit. But as candid as Capote can be, one ultimately gets the sense that the author always knew his letters would be read by a wider audience some day, and rarely does Capote express less than bubbling enthusiasm and childlike devotion to his correspondents. It's up to Clarke, Capote's biographer, to fill in the occasionally sordid blanks, which he does in chapter intros and extensive footnotes. Much more profound than any gossip is the humor, sensitivity and ambition with which Capote seems to have approached every experience in his life. and his incredible discipline and passion for writing, spending hours sequestered in some of the world's most glamorous locations, composing the stories and books. This entertaining collection gives us a firsthand account of Capote's journey as he comes into his own as an artist, charting his gradual but inevitable transformation into a literary and society superstar. Readers who want to know more about the real Capote will pick up the author's books (which include and ) and continue to revel in his wise and whimsical prose. B&w photos not seen by

The Complete Stories of Truman Capote