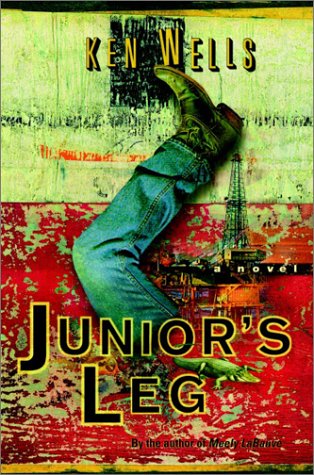 scribe Wells's semisequel to his first novel, , is a zesty, Cajun-flavored bouillabaisse of gritty melodrama, warts-and-all character study and old-fashioned morality tale. It can be abrasively entertaining, and demonstrates the author's considerable flair for offbeat Bayou-country characterization. Unfortunately, too many mismatched genre elements and a heavily predictable, almost schematic "road to redemption" story line scar an otherwise promising sophomore outing. Narrated by Joseph "Junior" Guidry, an embittered, boorish former roughneck who lost his left leg in a freakish drilling-rig accident, the novel paints a chronically self-destructive man's ever-so-gradual journey toward moral and spiritual self-improvement. Junior is a memorable creation, an inveterately nasty, unabashedly cynical recluse who tosses off quips about how he won't take any breakfast he can't drink, and who even considers tossing his prosthetic leg at a well-meaning interloper on one occasion. He's undeniably crude, bad-tempered and ignorant, but his self-mocking sense of humor and no-nonsense attitude make him a perversely sympathetic character, vaguely reminiscent of some of James Ellroy's or James Lee Burke's more likable losers. Into his barren, loveless life comes Iris Mary Parfait, an ethereal mystery woman fleeing a violent past, who turns lost-cause Junior into her pet project. Of course Junior and Iris Mary fall in love; and, of course, Iris Mary's ostensibly dormant past blazes back into life, plunging the two into a corrupt world of crooked cops, shady lawyers and urbane Mafia dons. If only Wells had been able to decide exactly what kind of book he wanted to write, this could have been a full-on winner. As it is, its piquant and pugnacious analysis of its protagonist's deeply flawed character is ultimately tarnished by a series of trite confrontations with scowling, textbook villains and by Junior's rushed, unrealistic and oversimplified romance with the too-perfect Ms. Parfait.