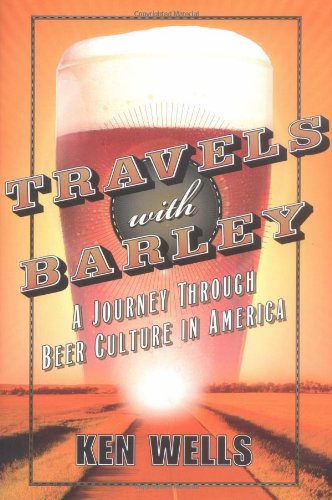 TRAVELS WITH BARLEY: A Journey Through Beer Culture in America

Thoreau said, "The tavern will compare favorably with the church." Following this premise rather closely, longtime writer and novelist Wells ( ) searches for his preferred house of worship: the "perfect beer joint." Setting out to follow the Mississippi River, Wells writes, "I would begin in Minnesota among folk who, geographically speaking, are practically Canadians and by reputation descended from good beer-drinking Swedes and Germans. I would slide down soon enough into the Great Beer Belly of America, for, by lore at least, Midwesterners are presumed to be the mightiest of U.S. beer drinkers." Full of profundities ("One thing you can say about lagers: the good ones don't make you work very hard to like them"), the book also lends historical, scientific and cultural insights into the $75 billion industry—from the likes of beer behemoths like Budweiser to newfangled Extreme Beer, which has bottle values comparable to fine Bordeaux. Along the way, Wells encounters quirky characters, and the pages he devotes to describing brewers, bar proprietors, bartenders and plain ol' beer drinkers prove he's more interested in beer people (84 million Americans drink beer) than the industry itself. Wells's storytelling abilities complement his journalist's eye for stats and facts, making this a humorous, lively and informational tour.