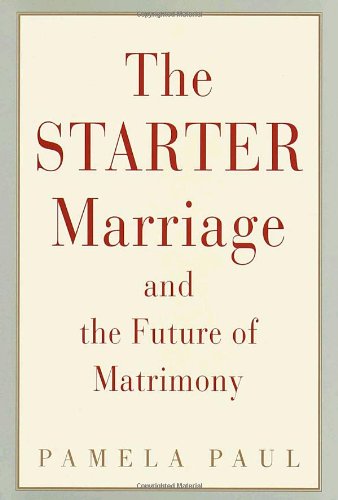 I DO... FOR NOW: Starter Marriages and the Future of Matrimony

When Gen X journalist Paul found her marriage ending one year after the lavish nuptials, she was depressed and bewildered. Soon, all around her, she was seeing other 20-somethings with failed "starter marriages" (which she defines as lasting five years or less and ending without children). To understand what was happening, Paul interviewed some 60 couples, mostly white, college-educated friends of friends, all between the ages of 24 and 36. While many of her generation had divorced parents, she found, they still hold marriage in high regard; family togetherness and children are what add up to the "good life." But idealizing the institution of marriage and understanding what married life is actually like are distinctly different. There's much clarity about the wedding—it's a major social event, costing an average of $75,000 in New York. But the morning after, couples are often clueless. Examining the process of dissolution, divorce and remarriage, Paul draws on social pundits and demographers in addition to the accounts of her interviewees, mostly sidestepping the details of her own sorry experience. Paul's Rx for the future? Not religious or political panaceas like courtship classes, "covenant marriage" or tax preferences. Rather, young people should be taught "what marriage can and cannot offer" and to have "realistic expectations" long before the engagement party. As a society, he says, we could celebrate delayed marriage, rather than encouraging it early, and more people could accept cohabitation as a method of confirming couple compatibility. Assigning this book in every college sociology class would also be a good start.