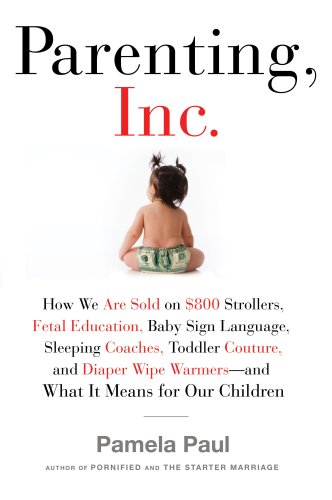 Paul ( ), mother of two, probes the business of parenting, exposing the high price of raising kids in our consumer-driven nation. Paul points out that it costs upwards of a million dollars to raise a child in the U.S. these days, especially if one buys into the theory that baby must have everything on the market. Following the money, Paul dissects the booming baby business, including “smart toys” that don't really make kids smarter, themed baby showers and parenting coaches and consultants. The text is a tireless rundown of parents' seemingly bottomless pocketbooks when it comes to bringing up baby, and according to Paul this is not just an upscale, cosmopolitan phenomenon—throughout the country parents are reaching deep into their pockets to fuel this spiraling craze. Though Paul incorporates the pithy quotes of a number of experts, such as psychologist David Elkind's observation, “Computers are part of our environment, but so are microwaves and we don't put them in cribs,” readers may find themselves wishing for more commentary and less litany. But Paul isn't preachy, although she does reveal that what babies really need is holding, singing, dancing, conversation and outdoor play.