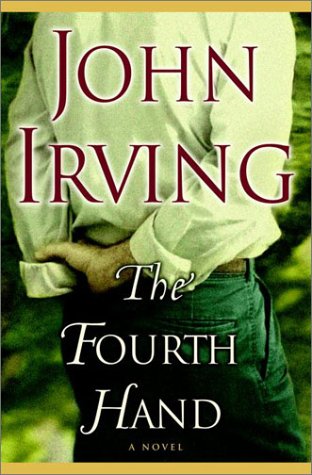 A touch of the bizarre has always enlivened Irving's novels, and here he outdoes himself in spinning a grotesque incident into a dramatic story brimming with humor, sexual shenanigans and unexpected poignancy. While reporting on a trapeze artist who fell to his death in India (shades of Irving's ), handsome TV anchorman Patrick Wallingford experiences a freak accident—his left hand is chewed off by a lion. Wallingford's network, a low-rent pseudo-CNN, promotes the video of the accident, making Wallingford notorious world-wide as "the lion guy." Five years after the accident, Wallingford is made whole via the second hand-transplant ever. The hand comes with a strange condition, however. It belonged to Otto Clausen, who willed it to Wallingford at wife Doris's instigation, and Doris wants visiting rights. On her first meeting with Wallingford, they have sex, Wallingford recognizing Doris's voice as one he heard in a vision in India while recovering from his accident. Doris, desperate to get pregnant, has her own agenda. Soon, in a sort of reversal of , she is teaching the normally satyric Wallingford to domesticate his libido. Irving is not aiming for a grand statement in this novel, but something closer to the lovers-chasing-lovers structure of farce. As in all good comedy, there are some fabulous villains, chief among them Wallingford's sexually Machiavellian boss, Mary, who also wants to conceive his baby. Irving's set pieces are on that high level of American gothic comedy he has made uniquely his own—the scene in which Wallingford goes to bed with a gum-chewing makeup girl is particularly irresistible. Refreshingly slim in comparison with Irving's previous works, and written with a new crispness, this fast-paced novel will do more than please Irving's numerous fans—it will garner him new ones.