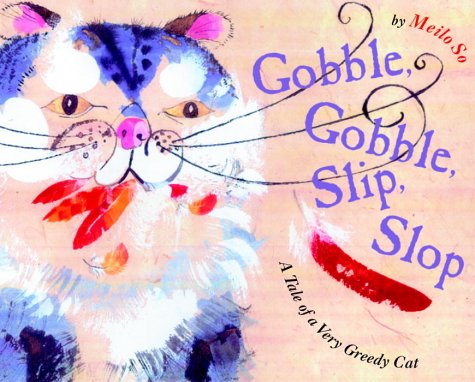 Tropical colors and bold brushwork burst forth from the pages of So's ( ) first solo outing. Against the backdrop of old India's towers and minarets, So retells the Indian folktale "The Cat and the Parrot," about a feline so greedy he eats a mountain of cakes, the parrot who made them, and much more before he repents. The narrative barrels along in a cumulative style—"I've eaten five hundred cakes,/ I've eaten my friend the parrot,/ I've eaten the nosy old woman,/ I've eaten the farmer and his donkey,/ and I can eat all of you, too,/ I can, I can./ .../ So gobble,/ gobble,/ slip, slop/ the cat ate the sultan and his bride." Meanwhile, like the Old Lady Who Swallowed a Fly, feast by feast, the cat's portrait grows from one page to occupying a full spread, his big furry belly transforming into a sea of white. So's accomplished use of spare gouache strokes, ink lines and controlled areas of hot color deftly convey texture and action. The eating spreads show the hapless victims disappearing one after another under the cat's enormous whiskers, each mouthful more outlandish than the last. Only when a couple of digested crabs realize they can cut their way out of the cat's huge stomach can everyone exit, a scene so sprawling that it requires a gatefold to show the exodus. A thoroughly satisfying cautionary tale that youngsters will clamor to take off the shelf for another look. Ages 3-8.