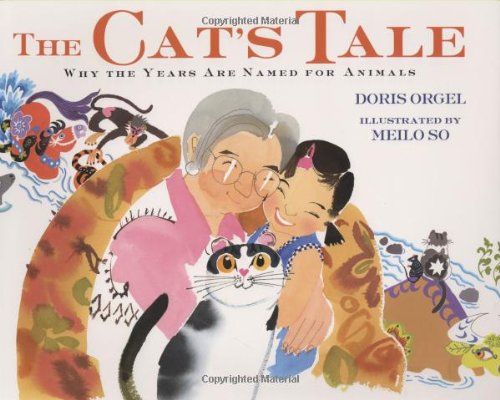 The Cat’s Tale: Why the Years Are Named for Animals

An awkward narrative frame complicates Orgel’s ( ) retelling of a well-known Chinese folktale explaining the naming of the Chinese zodiac, and not even So’s ( ) buoyant, abundantly patterned watercolors compensate for the structural flaws. Willow’s grandmother, known as Nai Nai, is babysitting and beginning to read a version of the titular story when the narrator—the cat Mao—objects with a sharp scratch to Nai Nai. Banished, with Willow following him in solidarity against Nai Nai, Mao purrs—“Purring makes magic happen. I turn into that cat from long ago, and tell my story.” With this, the cat relates his part in the famous river race between 13 of the Jade Emperor’s favorite animals (he ends up stranded). The artist clearly delineates the two strands, adopting loose lines and floating vignettes on white space for the contemporary narrative and shifting to a highly stylized, decorative approach for the fable. Orgel implies a parallel: the cat and Willow are stranded by their impulsive choices and rescued by generous elders, but she joins the two story lines so oddly that the connection may elude the audience. Ages 5–8.