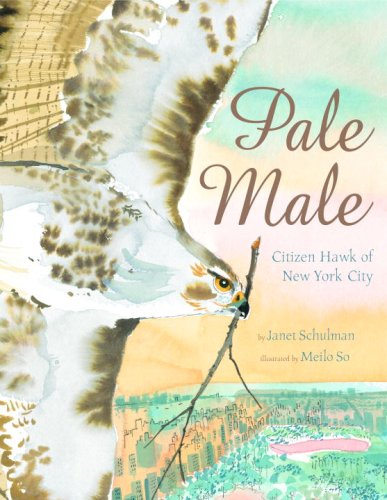 Although the red-tailed hawk of Fifth Avenue has inspired at least two other picture books, this version stands out for its urbane, reportorial prose and stylish watercolors (according to jacket copy, Schulman wrote with So specifically in mind; the pair also worked together for ). To Schulman, Pale Male and his family, who became a cause célèbre when they built a nest on a ledge outside one of Manhattan's toniest apartment buildings, deserve to be thought of as “true-blue New Yorkers—tough, resourceful, and determined to make it in the city.” So seconds that emotion with deft, impressionistic brushstrokes and splashes of color reminiscent of fashion illustration; her images capture not only the cool majesty of the bird, but also the tentative half-flights of the chicks and the eclectic élan of the city that lobbied for them. The politics of the Pale Male story are confronted head-on: the privileged residents of 927 Fifth Avenue, who tried to evict Pale Male by destroying his nest, get a gentle but thorough drubbing. Formidably dressed, clutching highballs and generally scowling, they're in clear violation of Big Apple spirit (the author notes that they took advantage of “a time when many conservation and wildlife laws were being relaxed by President George W. Bush's administration”). By the final page, even readers who live far from Manhattan will appreciate that Pale Male's significance and stature rise well beyond those of media darling. Ages 6-12.