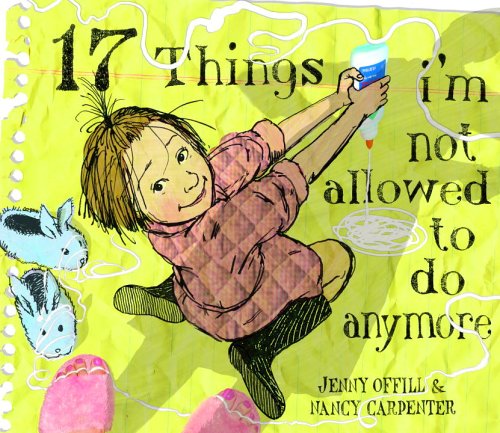 17 Things I'm Not Allowed to Do Anymore

The title is terrifically cheeky, and Carpenter ( ) outdoes herself in these mixed-media illustrations. The unnamed heroine, who resembles a cross between Ramona Quimby and Eloise, generates the title list as a result of her free-spirited, rule-breaking notions. "I had an idea to staple my brother's hair to his pillow," accompanies a photo-collage image of a stapler clamping onto a pillow corner, with a pen-and-ink drawing of the brother's sleeping face. Opposite, the boy, bound into his pillowcase, clings to his mother: "I am not allowed to use the stapler anymore." Offill ( , for adults), making her children's book debut, follows with a litany of forbidden behavior encompassing everything from not being allowed to make ice cubes ("I had an idea to freeze a dead fly in the ice cube tray") to not being allowed "to talk (even a little bit) about beavers anymore" (because she "had an idea that [she] might run away to live with the kind and happy beavers"). Carpenter uses a fluid, elegant ink line to convey an impressive repertoire of expressions—she's equally adept at portraying a playground tattletale and a mom at the end of her rope. Kids will be intrigued by the pictures' playful sense of composition as well as the heroine's brazenness, but may be caught off-guard by the abrupt conclusion. Ages 4-8.