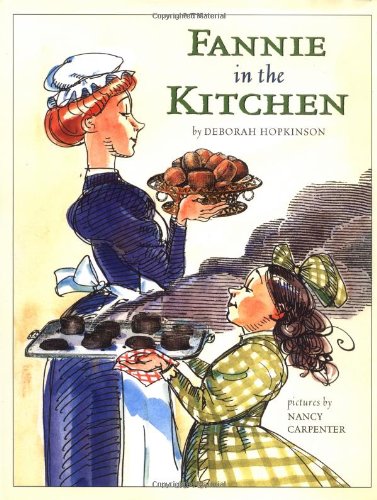 FANNIE IN THE KITCHEN

Prepared to perfection and served up with style, this historical nugget imagines an interlude in the life of cookbook pioneer Fannie Farmer, who, prior to her stint at the Boston Cooking School, worked as a mother's helper. As Hopkinson () envisions it, the daughter of the house—who has a touch of the Eloise gene—is not at all pleased with Fannie's arrival. " your helper," the spunky Marcia protests to her mother, but she soon becomes an acolyte: "Fannie seemed like a magician who could make mashed potatoes fluffier than clouds and blueberry pies sweeter than a summer sky." Marcia's many culinary flops, on the other hand, from discovering that she has cracked a rotten egg into her batter to flipping a griddle cake onto the cat, ultimately inspire the unflappable Fannie to write down precise instructions in a precursor to her immortal cookbook. Cleverly served up in seven brief "courses," the proceedings are garnished with Carpenter's irreverent illustrations, which seamlessly incorporate period engravings within pen-and-wash drawings. Her scenes wittily spoof Victorian decorum, whether showing the perfectly coiffed and coutured lady of the house greedily licking her plate or the initially sullen Marcia, slumped in a chair with her back to the reader, her scowl reflected in a pair of water glasses, a gravy boat and a decanter. The biographical afterword and an appended pancake recipe are simply icing on the (griddle) cake. Ages 4-9.