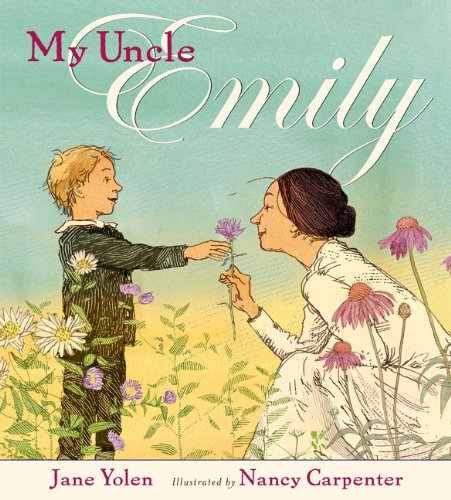 Caldecott Medalist Yolen ( ) turns her attention to the poet Emily Dickinson and her young nephew, Thomas Gilbert (“Gib”), expanding on some real-life interactions between them to explore the role of poetry in human life. Gib feels obliged to defend his reclusive aunt's honor when a classmate makes fun of her, then can't bring himself to tell his family about the fight. Uncle Emily (their private nickname for her) can tell he's holding back and gives him a poem that explains how he can preserve his integrity—once he understands her poetic language. “ 'Tell all the Truth,' it began, 'but tell it slant—/ Success in Circuit lies.' ” Carpenter's crisp tableaus evoke the period with restraint: adults poised with teacups, girls in lace collars, boys in short pants. In one striking image, Gib kneels by his bed, studying a dead bee and a poem his aunt has written about it, “as if she wants me to see the world/ one small bee/ and one small poem/ at a time”—a description that might also apply to Yolen. Ages 6–8.