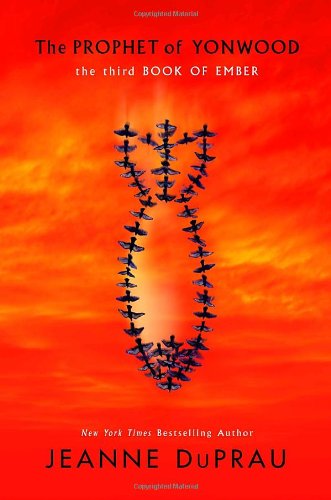 This third book in DuPrau's series is billed as a prequel to the first two ( and ), but the connection is tenuous. Eleven-year-old Nickie Randolph wants "to do something helpful for the world," which is on the brink of war. Fear of terrorist activity is wreaking havoc in American cities. Against this backdrop, Nickie and her aunt travel from Philadelphia to Yonwood, in the North Carolina mountains, to prepare Nickie's great-grandfather's home for sale. Yonwood is a tense, parochial town, where the fevered ramblings of an older woman have been seized upon as "visions," and the woman hailed as a prophet. Local busybody Brenda Beeson, whose mantra is "one moldy strawberry can ruin the whole basket," zealously takes charge, interpreting the Prophet's messages and building a "shield of goodness" against impending evil. DuPrau scatters the text with intriguing elements—clues hidden in postcards, mysterious writings about "eleven dimensions" found in a journal—but they function more as entertaining distractions rather than to advance the story. DuPrau unfortunately undercuts the novel's more serious themes—the nature of goodness, and of God—with a manipulative, rather nonsensical denouement. But while the plot never fully ignites, the smooth writing will carry fans of the first two books along, and there's ample room (50 years) between this book and for yet another prequel. Ages 8-12.