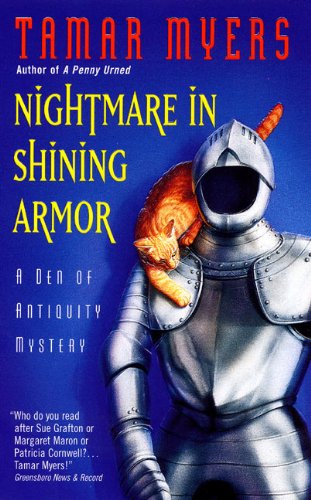 Humor and hijinks abound in Myers's eighth Den of Antiquity mystery (;) set in Charlotte, N.C. Feisty Abby Timberlake, an antique store owner and amateur sleuth, is celebrating the purchase of her new house by throwing a costume party. Among the revelers present is her ex-husband's much younger wife, Tweetie, who arrives dressed as Little Bo Peep. When the Statue of Liberty accidentally starts a fire with her torch and Moses douses the blaze with a bowl of punch, Abby kicks everyone out, including her flamboyant mother and her fiancé. Later that evening, Abby and her friend Wynnell—who had passed out during the party—discover Tweetie's dead body encased in a suit of armor and stuffed under Abby's bed. Due to Abby's rude behavior the night before, there's no shortage of people who would like to see her take the rap for the murder, so she sets out to do a little snooping of her own. She soon finds that Tweetie had about as many enemies as she did amours and that the citizens of Charlotte aren't all as respectable as they seem. Oddball characters and clownish antics tend to outshine this cozy's plot, and Myers's caustic secondary characters are off-putting. Nevertheless, antique lovers and fans of the series will enjoy this fun, frivolous read.