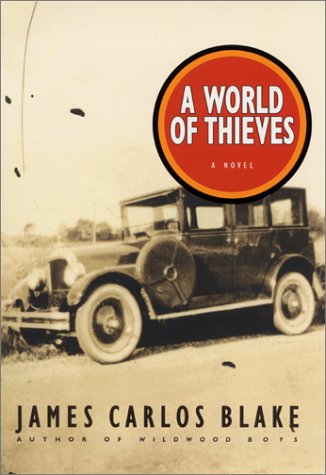 A WORLD OF THIEVES

Just as he distorted misbegotten military power to romanticize the bloody Civil War reality of Kansas and Missouri in his novel , the award-winning Blake glamorizes a band of outlaws who embark on an abortive crime spree in this hard-driving novel set in Texas and New Orleans in 1928. An honor student and boxing champion, Sonny LaSalle is enamored of his roguish uncles Buck and Russell, who have taken up armed robbery after serving during World War I. After both of his parents die within 10 months of one another, Sonny drops out of his fancy New Orleans high school and joins the gang. Arrested on his first job, the unlucky young man accidentally kills the cop son of the infamous lawman John Bones and is sentenced to 30 years in Angola. Escaping after nine months, he goes to New Orleans and tracks his uncles to Galveston, Tex., where they have headed for easy money in the oil boom of west Texas. Unbeknownst to Sonny, the relentless, sadistic John Bones is tracking him to exact revenge for the murder of his son. In a San Antonio hotel where Sonny is hiding out after a poker scam gone bad, he rescues Belle, a 17-year-old girl drugged and forced into posing for pornography. The slipshod robbers' spree becomes a tragicomedy of blunders as, still unaware of John Bones's inexorable pursuit, they move to the oil-field shantytowns and approach a rather anticlimactic, biblical epiphany. While not Blake at his rhapsodic best, this is an entertaining novel full of outsized characters and as much humor as brutality.