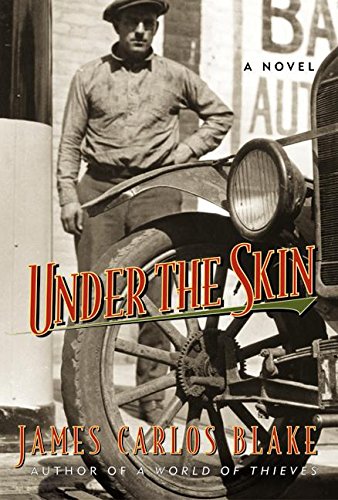 Blake's gritty tales of the modern West (; ) have won him critical praise, a cult following and comparisons to Cormac McCarthy, but he has yet to attract a wide literary audience. Despite its gripping premise, his latest effort is unlikely to break him out. Narrator James ("Jimmy the Kid") Youngblood takes readers into the dark criminal underworld of Depression-era Texas, specifically the Free State of Galveston. Offspring of a Mexican revolutionary and a beautiful Anglo prostitute, Jimmy becomes the chief gunsel for the Maceo brothers, barbers turned mob bosses who run the city's graft and gambling enterprises. The plot ostensibly focuses on the conflict between the Maceos and a Dallas-based mob that has tried to encroach on the brothers' territory, but a subplot involving Jimmy's budding love affair with the young wife of a Mexican warlord soon overshadows the gang wars and carries the novel to an explosive climax in the Mexican desert. The historical detail is deftly deployed, and the portrait of 1930s Galveston alone makes the book worthwhile for fans of the modern western. However, the novel is hampered by trite dialogue and a thin plot that is only partially shored up by a 40-page flashback revealing Jimmy's checkered past. Supporting characters, even his chief love interest, seldom come off the page. Most of all, Blake doesn't quite succeed in making the ruthless Jimmy—a tough guy's tough guy who easily rationalizes murder and cruelty—into a three-dimensional, fully human character. The novel is still a good read, and Blake fans will find this a worthy addition to his growing canon—but one feels that Blake has a much stronger novel inside him.