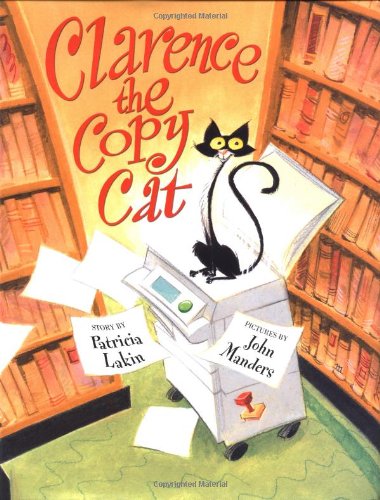 At the start of Lakin's () appealing story, Clarence, a pacifist cat, gets evicted from Sam's deli: "Clarence stuck to his principles. He would not hurt mice." When he finally finds a new home at the library and the inevitable mouse arrives, Clarence eats the mousetrap cheese and builds barricades of books to keep the mouse at bay. Nothing works until Clarence leaps to save the mouse from the broom-wielding librarian, lands with a "big fat belly flop right on the copy machine glass," and photocopies of Clarence's terrified face scare the mouse away. Like sketchy caricatures, Manders's () action sequences and characters seem ready-made for animation, and when the spindly-legged Clarence sees the photocopy of himself as "a huge black cat with bulging legs, an enormous tummy, and whiskers that stuck out like arrows," the visual joke has wry resonance. While the library pictured in the book (patterned after a branch of the Carnegie Library of Pittsburgh) is curiously bland (title-less books of a uniform color fill the shelves), book lovers will find the picture of Clarence and the librarian nestled together in a comfy window seat a satisfying parting view. Ages 4-8.