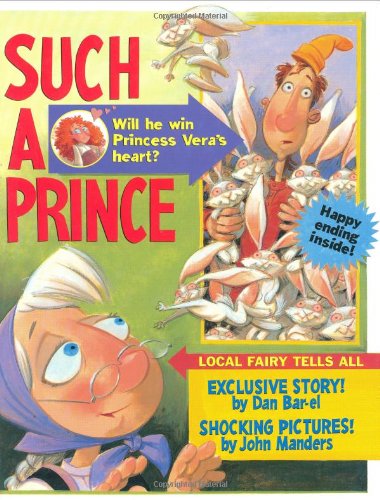 Happy ending inside!” reads a burst on the cover of this loopy send-up of a familiar story line about winning the hand of a princess. On the way to that happy ending, Bar-el’s ( ) snappy text and Manders’s ( ) animated, playfully exaggerated gouache and colored pencil pictures provide plenty of laughs. The narrator is a feisty fairy named Libby Gaborchik, rendered as a bespectacled white-haired type, who refers to herself as “yours truly,” addresses readers as “darlings” and speaks with a hint of a Jewish-grandmother inflection. She diagnoses the ailing Princess Vera as “starved for love” and advises the distraught king that his daughter should eat three perfect peaches and then marry within a week. But not liking the manners of some of Vera’s suitors (“This is the way to talk to a stranger?” Libby comments disapprovingly), Libby decides to help goodhearted but poor Marvin. Among the book’s many pleasingly silly scenarios are Manders’s vignette of the wide-eyed, wild-haired princess dancing a fandango after devouring Marvin’s peaches and a large picture of that soon-to-be prince following through on the king’s orders to coral 100 wild rabbits. A harebrained joke, but a good one. Ages 4-8.