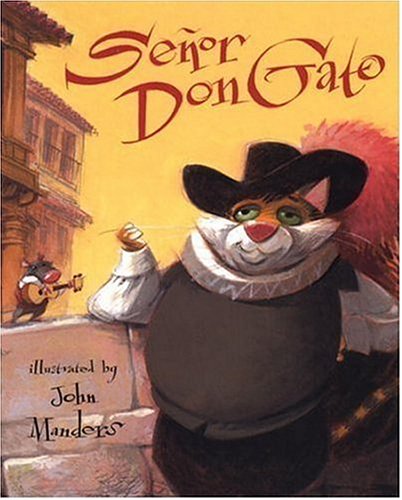 Manders, the raucous cartoonist of , skillfully highlights the absurdity of this well-known children's ditty. Based on a Mexican rhyme, the verse pokes fun at sentimental ballads by casting cats as the star-crossed lovers. A guitar-strumming mouse narrates: "Oh, Señor Don Gato was a cat./ On a high red roof Don Gato sat./ He went there to read a letter,/ Meow-Meow-Meow." Alas, in Don Gato's euphoria over his lady love's acceptance of his marriage proposal, he falls from the roof, breaking "his ribs and all his whiskers,/ .../ And his little solar plexus," and dies. But happily, as the funeral passes through the "market square,/ Such a smell of fish was in the air,/ Though his burial was slated,/ .../ He became reanimated,/ .../ He came back to life, Don Gato!" Gouaches in warm, subdued tones squarely establish time and place while rolling merrily along with the tongue-in-cheek melodrama. Cobblestone streets, orange-red tiled roofs and a buttery sky conjure a sunny, Spanish-flavored village, while Don Gato, dressed as a stuffy Elizabethan-collared dandy, evokes the era of conquistadors. All of Manders's humanlike felines—heavily costumed, walking on two legs—sport appealingly squatty bodies, wide jowls and expressive features. Don Gato, portly and dignified, oozes a self-satisfaction amusingly upended by his rather undignified fate. Musical notations at the end remind the audience that this spirited read-aloud can be a sing-along, too. Ages 3-7.