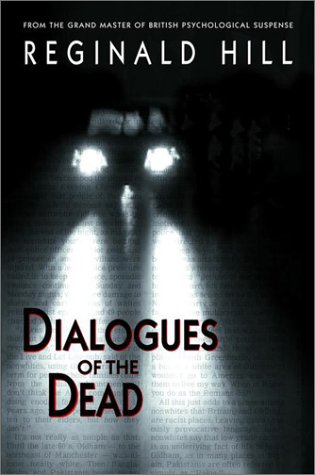 DIALOGUES OF THE DEAD

Known for complex plotting, deep characterization and sly humor, Hill here adds to his string of brilliant psychological thrillers featuring two of Britain's most well-rounded detectives. Supt. Andy Dalziel (aka the Fat Man) is the ultimate ham on wry. He takes no pains to hide his enormous appetites, but it pleases him to hide his sharp mind behind crude behavior and ribald speech. He pretends to misunderstand the erudite conversation of the various intellectuals who inhabit the story and delights in puncturing their pompous pronouncements. When one expert adviser presents what he calls an "interesting" theory, Dalziel responds, "If you're waiting for a bus and a giraffe walks down the street, that's interesting. But it doesn't get you anywhere." Refined, polite, rock-solid Inspector Peter Pascoe is the perfect foil to his outlandish boss. Between them they've found truth in many a maze, but here both play background roles to rookie constable Bowler, inevitably nicknamed Hat. Hill's fans know his fondness for all sorts of wordplay, but he takes it to new level, for a word game is the crux of the mystery. The killer enters a short story competition with a piece, written in the form of a one-sided dialogue, that describes a murder and dares the police to untangle the clues planted therein. When they fail, another story submission arrives, describing a second murder. Five more people die before Pascoe's flash of insight illuminates the proper path. One final twist at the very end will take readers' breath away.