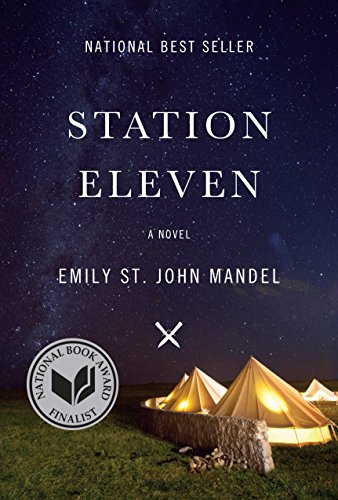 Few themes are as played-out as that of post-apocalypse, but St. John Mandel (The Lola Quartet) finds a unique point of departure from which to examine civilization’s wreckage, beginning with a performance of King Lear cut short by the onstage death of its lead, Arthur Leander, from an apparent heart attack. On hand are an aspiring paramedic, Jeevan Chaudary, and a young actress, Kirsten Raymonde; Leander’s is only the first death they will witness, as a pandemic, the so-called Georgia Flu, quickly wipes out all but a few pockets of civilization. Twenty years later, Kirsten, now a member of a musical theater troupe, travels through a wasteland inhabited by a dangerous prophet and his followers. Guided only by the graphic novel called Station Eleven given to her by Leander before his death, she sets off on an arduous journey toward the Museum of Civilization, which is housed in a disused airport terminal. Kirsten is not the only survivor with a curious link to the actor: the story explores Jeevan’s past as an entertainment journalist and, in a series of flashbacks, his role in Leander’s decline. Also joining the cast are Leander’s first wife, Miranda, who is the artist behind Station Eleven, and his best friend, 70-year-old Clark Thompson, who tends to the terminal settlement Kirsten is seeking. With its wild fusion of celebrity gossip and grim future, this book shouldn’t work nearly so well, but St. John Mandel’s examination of the connections between individuals with disparate destinies makes a case for the worth of even a single life. (Sept.)
close
Details