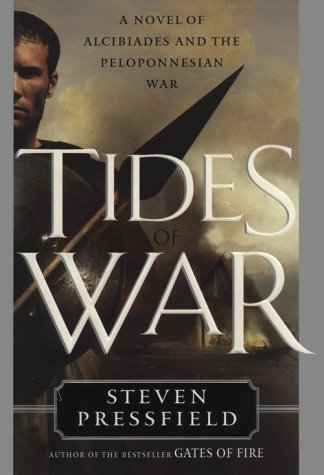 Tides of War: A Novel of Alciblades and the Peloponnesian War

After Pressfield's stunning 1998 best-seller, Gates of Fire, which documented the Spartans' heroic last stand at the Battle of Thermopylae in 480 B.C., comes this follow-up epic novel of the Peloponnesian War, as Athens and Sparta slug it out for Greek hegemony during the Hellenic Age. Once again, Pressfield's narrator is a condemned man, in this instance the Athenian soldier and assassin Polemides, who is awaiting execution for treason. Spanning the 27 years of conflict, famine and plague that marked the Peloponnesian War, Polemides' death-row confession reveals the rise and fall of the powerful and mercurial Alcibiades, a brilliant general and shrewd politician, whose ego and ambition were as threatening to his jealous friends and allies as to his enemies. As his formerly trusted bodyguard, Polemides shows Alcibiades battling his enemies in his relentless pursuit of glory and power, only to die in exile at the hand of a familiar assassin. Despite his bloody victories on land and sea, Alcibiades changes sides too often to ensure his long-lasting legacy, and though over time he fights for the Athenians, Spartans, Persians and Thracians, he eventually discovers that he is an outcast and perceived as a danger to all of them. The voice of Polemides is ideal, for he relates this astounding, historically accurate tale with the hot, sweaty hack-and-stab awareness of an armored infantryman, the blood lust of a paid killer and the wisdom of a keen observer of complex and deadly Greek politics. Pressfield is a masterful storyteller, especially adept in his graphic and embracing descriptions of the land and naval battles, political intrigues and colorful personalities, which come together in an intense and credible portrait of war-torn ancient Greece. (Apr.)
close
Details