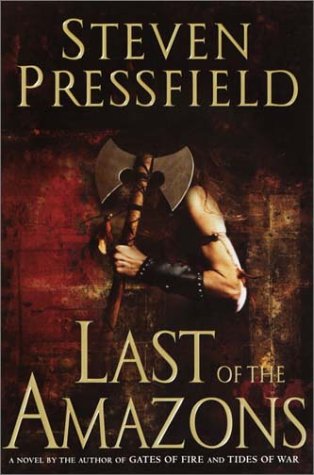 LAST OF THE AMAZONS

Writing about ancient Greece with rich historical detail, passion and drama, Pressfield has previously dramatized the battle of Thermopylae () and the Peloponnesian War . Here, he steps further back in time, to 1250 B.C., when the civilized Greek city-state of Athens confronts the barbaric empire of the Amazons in a titanic struggle for survival. The novel does not pack the emotional punch of Pressfield's other Greek fiction, but it still rings with the clamor and horror of close combat, sword on shield, battle-ax on helmet and javelins thudding into armor. The Amazon kingdom, peopled and ruled by a ferocious society of female warriors, occupies land near the Black Sea. The Amazon war queen, Antiope, leads an army of female warriors feared for their savage cruelty and hatred of the Greeks. When Theseus, the Greek king of Athens, journeys into Amazon territory, he and Antiope spar verbally, but fall in love, creating a dilemma for both. Antiope forswears her allegiance to the Amazon life and flees with Theseus back to Athens to become his wife. Antiope's successor, her Amazon lover, Eleuthera, vows to wipe out Athens to erase the shame and treachery of Antiope and Theseus's marriage. She leads a mighty invasion of Greece, culminating in a long siege and a climactic battle before Athens's great walls. Amid the carnage, gore and violence, Pressfield presents a love story so grand it pits nations against one another. Pressfield's javelin is his pen and he wields it well in this gruesome tale of ancient blood lust in an age when there is no word for mercy.

Last of the Amazons The Legend of Bagger Vance