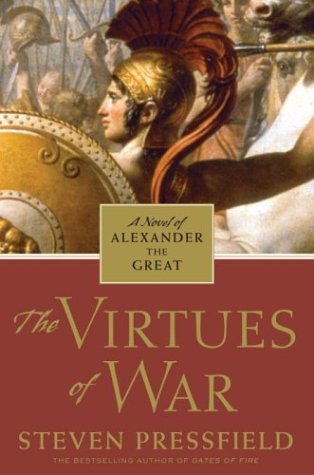 THE VIRTUES OF WAR: A Novel of Alexander the Great

"I have always been a soldier. I have known no other life." Esteemed historical novelist Pressfield ( ; ) crawls inside the brave heart of Alexander the Great in this chronicle of the king's bloody and extraordinary accomplishments and boundless ambition. Presented as Alexander's confessions (and lessons) to his brother-in-law, Itanes, as the Macedonian commander and his increasingly reluctant armies try to figure out how to cross "this river of India" to engage in yet another battle, the novel tells of Alexander's father's last victory (the defeat of the Greeks at Chaeronea) before his assassination; of how, over his father's corpse, Alexander cements his plans for future campaigns; of his struggle with his "daimon," which would call him to glory; of his burning of Thebes; of his march east and his slaughter throughout Asia; of his murder of his friend Cleitus ("I felt his spine shear"). Alexander's voice swoops from high-minded rhetoric to earthy vernacular as he regales Itanes with bloody battle scenes and stories of horror and triumph. For devotees of Alexandrite military history—and there are many—this is a sympathetic if slightly overlong portrait of a man who knew no doubt: "Fame imperishable and glory that will never die: is what we march for!"