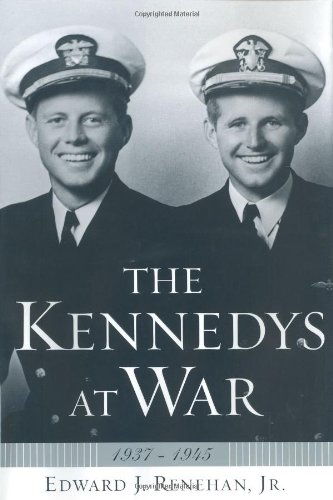 Veteran biographer and historian Renehan ( etc.) presents a well-written, well-researched account of the Kennedys in the years leading up to and during WWII. Renehan begins with the ambitious patriarch, Joseph Kennedy, Sr., his ambiguous relationship with President Franklin Roosevelt and his disastrous turn as ambassador to Great Britain. Kennedy's fervent isolationist views, combined with both anti-Semitic and pro-fascist leanings, made him an ardent supporter of Neville Chamberlain's disastrously failed policy of appeasement. Not long after WWII broke out, the ambassador resigned, to FDR's relief. Rehehan is most revealing on the way the sinking of son JFK's boat, the fabled was turned from a disaster into a public relations triumph: initially, JFK was to be blamed for not noticing advancing enemy vessels, one of which rammed his boat, and Gen. Douglas MacArthur "is supposed to have said that Jack should have been court-martialed." However, molded by sympathetic journalists like the 's John Hersey, the saga benefited from early public relations "spin" and boosted JFK's later political career. JFK's brother Joe Jr., the family's heir apparent, was killed in 1944 during a mission over France. Tragedy struck the family again when sister Kathleen's new husband was killed fighting in Belgium. Renehan argues quite convincingly that the war was the transformative experience of young JFK's life, and set the tone for both the triumphs and tragedies that would mark the family for the rest of the century. This is a worthy installment in the always-popular Kennedy saga.