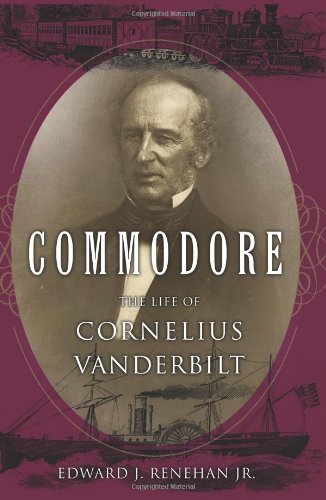 Commodore: The Life of Cornelius Vanderbilt

The latest from Renehan, author most recently of a much-praised biography of another titan of 19th-century business, Jay Gould, is a thorough look at Cornelius Vanderbilt (1794–1877), who rose from nothing to amass one of the great fortunes in American history (“more than $158 billion” in 2005 dollars) in the burgeoning steamship and railroad industries. A brilliant, vicious businessman with little education, manners or patience for fools—including his long-suffering wife and 14 children—Vanderbilt makes an almost prototypical figure of pure American laissez-faire entrepreneurship. Unfortunately, for significant portions of this bio, the man gets lost behind the icon. Though Renehan's writing proves colorful, insightful and efficient in describing Vanderbilt's spirited early adventures taking on the steamship monopolies of former senator Aaron Ogden and others, the middle third of the book is too often bogged down in details that will appeal mainly to the business-minded—an endless cascade of ships (and their vital stats), routes and dollar amounts—and overshadow both narrative and character. Still, Vanderbilt's personal life is fascinating; highlights include the Vanderbilts' grand tour of Europe, his lifelong penchant for prostitutes (including the Woodhull sisters, whom Vanderbilt made the first female brokers on Wall Street) and the syphilis-induced madness that plagued his final years—material new in this biography and a testament to Renehan's typically assiduous research.