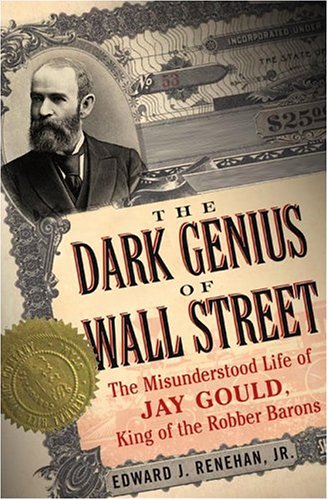 Dark Genius of Wall Street: The Misunderstood Life of Jay Gould, King of the Robber Barons

In the late 19th century, strong and well-moneyed families such as the Morgans and the Vanderbilts controlled the fortunes of Wall Street and the emerging industries. Renehan, author of splendid biographies of the Kennedys, Theodore Roosevelt and the naturalist John Burroughs, turns in a masterful glance at the social history of the Gilded Age as well as a brilliant biography of Gould, who outfoxed many of these other wealthy industrialists to win fame and fortune. Although his early work as a surveyor and a tanner did not bring Gould much wealth, he learned to engage in shrewd business practices that would eventually allow him to gain some dominance in the tanning industry. Wall Street and the newly emerging rail industries soon attracted his financial eye, and he turned his full attention to them. While he initially dabbled at the edges of the stock market, he picked up enough financial savvy to engineer a scheme to corner the gold market in 1869 and cause the infamous Black Friday frenzy. Renehan deftly chronicles Gould's canny financial successes in the acquisitions of the Erie, the Union and Pacific, and the Atlantic and Pacific railroads as well as the emerging telegraph industry. Maligned by his competitors and the media as an unscrupulous businessman, Gould never achieved the fame and status of Cornelius Vanderbilt or J.P. Morgan. Yet, as Renehan points out so gracefully, Gould was simply an ambitious financier in an ambitious time before the existence of regulations that his own financial deals helped create. Renehan's sumptuous prose and his dazzling research and style provide a window into Gould's ambitions and offer a first-rate social history of the financial workings of his time.