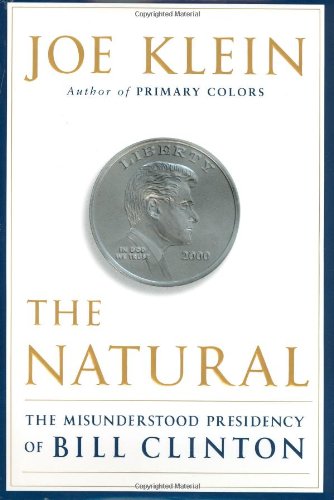 THE NATURAL: The Misunderstood Presidency of Bill Clinton

Klein may have set himself a formidable task when he decided to evaluate Bill Clinton's fractious presidency and his enigmatic personality without the camouflage of the fictitious characters that populated his bestselling , but he's more than up to it. This insightful, often funny book—which provides a serious and intelligent look at the successes and failures of the Clinton administration as well as an insider's view of the sometimes sordid, sometimes exhilarating political and personal battles that engaged the President—succeeds on every level. Clinton's positions on health care, affirmative action, NAFTA, welfare reform and foreign affairs are straightforwardly explained, and Klein's considerable knowledge and sophisticated understanding of the political arena add depth and breadth to the explanations. Klein doesn't—can't—ignore Clinton's affair with Monica Lewinsky, of course, and he argues that Clinton's willingness to take such shocking risks demonstrates an intrinsic weakness of tragic proportions. But Klein is even more critical of the fanatical press that fed on the affair, and the Newt Gingrich–led Republican ideologues and their subsequent suicidal impeachment mission. Klein also provides brilliantly illuminating caricatures of the political players who swirled around Clinton. North Carolina Senator Jesse Helms is an "antediluvian Visigoth," consultant Dick Morris "a prohibitively bizarre human being," and Gingrich is an "American Mullah" and a "faux revolutionary who tried to turn democracy into war." There will be numerous books written about Clinton and his presidency, but they will be hard pressed to capture the public and private Clinton as well as this one.